Under the Surveying and Spatial Information Regulation 2017, an “established survey mark” is any survey mark described in SCIMS has having a horizontal position equal to or better than Class “D”. This includes any mark with an indicated Class of 3A, 2A, A, B, C or D. Accordingly for heights, where “accurate height” is to be determined, only marks that have a vertical Class of L2A, LA, LB, LC, LD, 2A, A or B should be used for the adoption of AHD.

Approximate positions are Class “E” only, and marks with unknown position or height are Class “U” only.

Class is a function of the planned and achieved precision of a survey network and is dependent upon the following components:

all of which are usually proven by the results of a successful, minimally constrained least squares network adjustment computed on the ellipsoid associated with the datum on which the observations were acquired.

The following table refers to Class codes as they apply to coordinates in the SCIMS database and should not be used for any other purpose.

For more information on the determination of Class please refer to SP1 (v1.7).

Order is only shown for GDA94 coordinates. SP1 (v1.7) defines Order as:

Order is a function of the Class of a survey, the conformity of the new survey data with an existing network coordinate set AND the precision of any transformation process required to convert results from one datum to another.

Stations in horizontal control surveys are assigned an Order commensurate with the Class of the survey and the conformity of the survey data with the existing coordinate set.

The Order assigned to the stations in a new survey network following constraint of that network to the existing coordinate set may be:

a) not higher than the Order of existing stations constraining that network; and

b) not higher than the Class assigned to that survey.

Order is only shown for PSMs with coordinates in the GDA94 datum, this includes Order for heights in AHD71 (i.e. Ellipsoidal Heights in GDA2020 will show PU and LU).

For more information on the determination of Order please refer to SP1 (v1.7).

the uncertainty of the coordinates or height of a point, in metres, at the 95% confidence level, with respect to the defined reference frame. 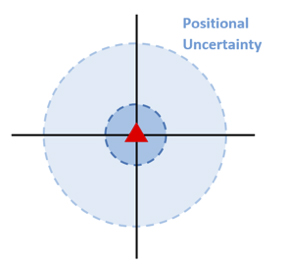 To make interpreting the values published for PU, SCIMS applies the following rules:

Local Uncertainty is defined in SP1 v1.7 as:

the average measure, in metres at the 95% confidence level, of the relative uncertainty of the coordinates, or height, of a point(s), with respect to the survey connections to adjacent points in the defined frame.

Local Uncertainty provides a general indication of how accurate a mark is with respect to the surrounding connected marks.

The same rules for rounding as applicable to PU have been applied to LU. 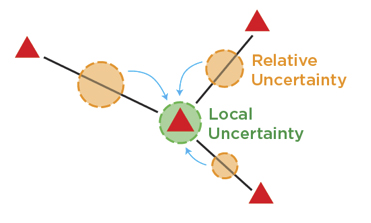 It is accepted that some heighting techniques, such as differential levelling, propagate errors in proportion to the square root of the distance. Other techniques, such as GNSS and trigonometric levelling, propagate errors mainly in proportion to the distance. This is particularly apparent on distances greater than 1 km. Therefore different types of Class and Order are assigned according to the heighting technique used. Refer to SP1 (v1.7) for details of observation techniques.

The following table refers to Class codes as they apply to heights in the SCIMS database and should not be used for any other purpose.

("d" in the table above refers to distance in kilometres)